Among our new experiences with Argentine culture, food, people, and politics, we found a country permeated by faith, beliefs, religion, and spirituality.  My personal experience supports the statistic (found on Wikipedia) that 70-90% of the nation claims Roman Catholicism.  However, the level of ‘activity’ ranges from my host dad, Alonso, who attends Mass EVERY day at 8 am, to several other host families or friends who rarely or never attend Mass (some admitting sheepishly, and some not).

I enjoyed seeking out and observing different displays of faith throughout our entire journey.  As mentioned in previous posts, the majority of Argentine people were very open to conversations regarding what Americans traditionally consider ‘taboo’ topics: politics and religion.  I was thoroughly delighted to ask questions about their faith/religion/and beliefs without fear of being impolite.  In return, many Rotarians, friends, host families, and students asked in-depth questions about my faith as well. (I am an active member of The Church of Jesus Christ of Latter Day Saints, also known as Mormons).  I am so thankful for all that was shared, and for what I got to experience and learn. 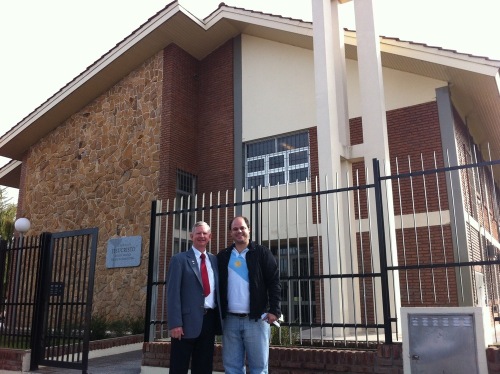 Before I could offer an invitation, my host mom, Silvana, in Santa Rosa asked if she and her daughter could join me for meetings in the LDS church just down the street.  I gladly obliged and was impressed with the respect and consideration I was given in regards to my religious beliefs.  Alonso (in Tandil) had even purchased malta (postum) for me to drink at coffee/tea time so I wouldn’t feel left out.  Pictured is Rich and his host, Franco in front of the LDS church in Santa Rosa. 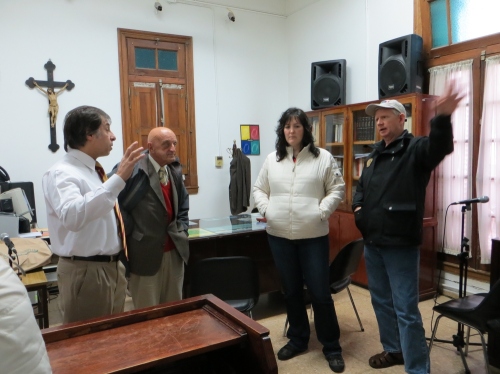 I joked that in Argentina they have no problem with the separation of church and state, but the fact is, this picture was taken inside a courtroom in General Acha. 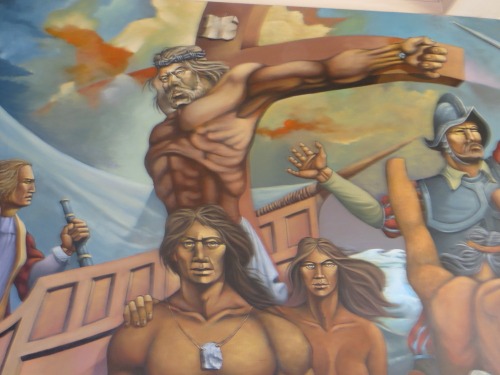 A very unique depiction of the crucifixion inside the municipal building in Trenque Lauquen. 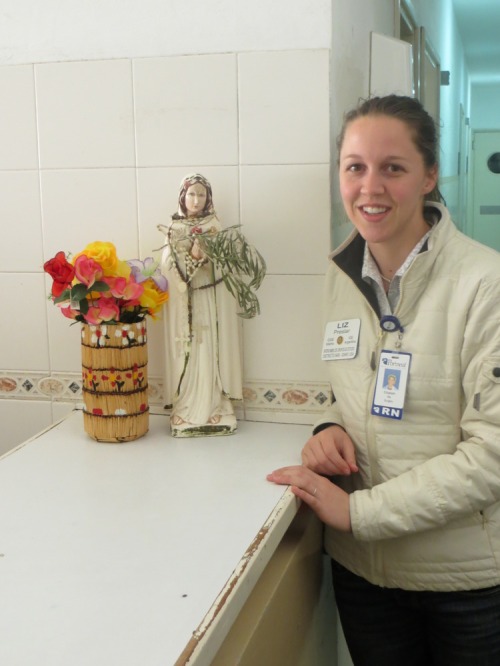 Religious figurine providing hope, comfort, and healing in the hospital in Trenque Lauquen.

This crucifix is small but exemplifies the ever-present symbols of faith in Argentina.  This photo was taken inside the operating room staff lounge in Bolivar. 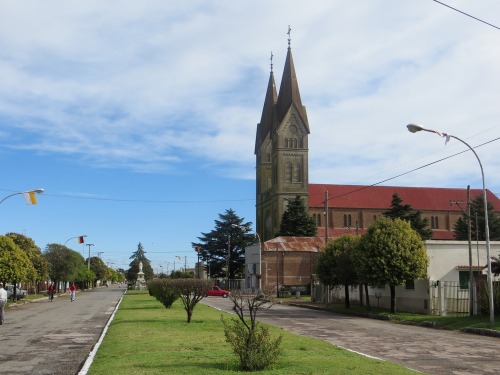 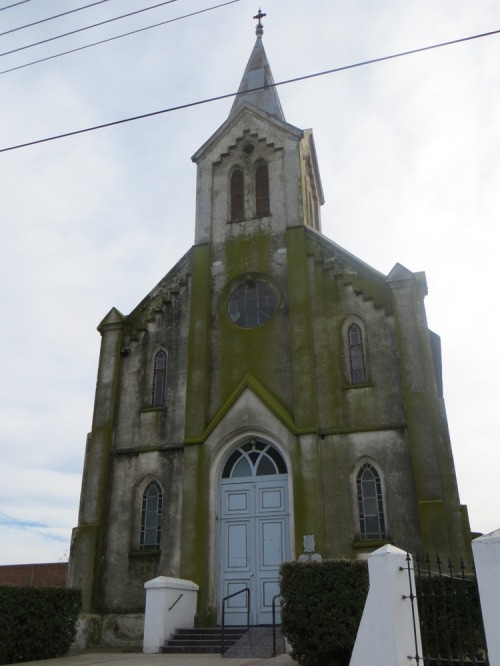 A few scenes from the German colonies outside of Colonel Suarez.  The streets were lined with alternating flags of Argentina, Germany, and Vatican City.  The carving of the woman was done long ago and shipped from Europe.  It’s done in wood and won a prestigious prize in an art contest before taking it’s place in this church. 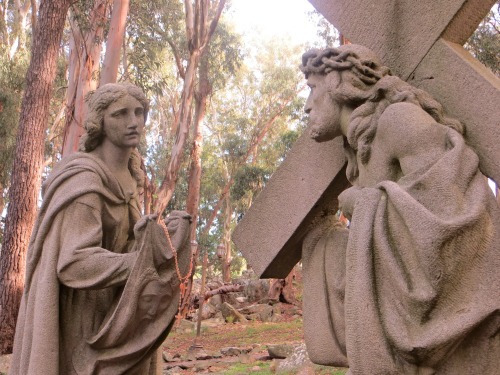 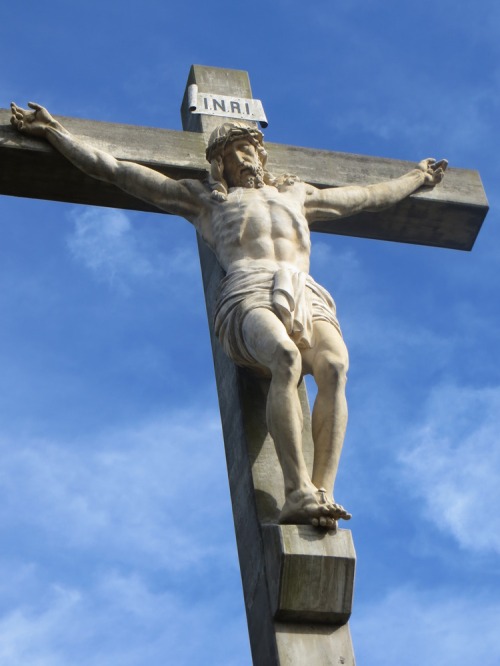 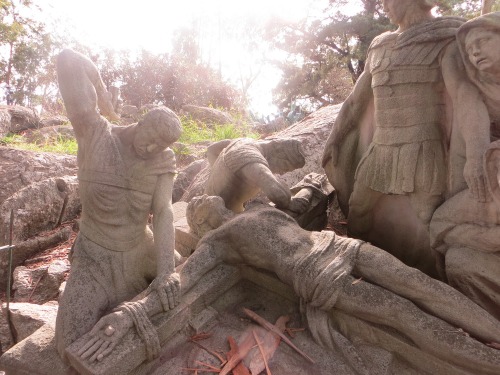 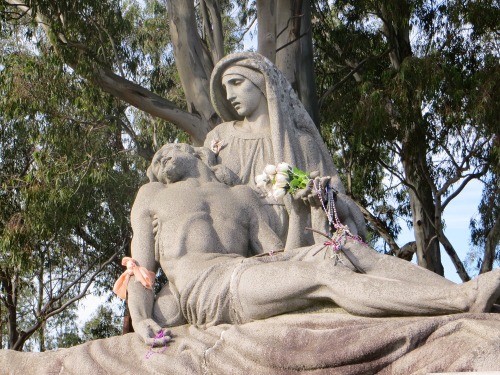 In Tandil we visited Mt. Calvary and viewed the moving images that make up the larger-than-life Stations of the Cross. A religious tourist attraction all year long, people flock to Tandil by the tens of thousands during their Easter celebration. 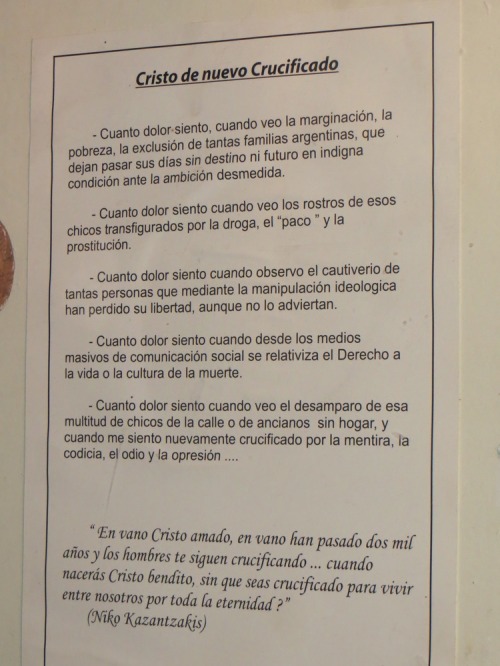 A Jesuit Mission outside of Mar de Plata

On our bus tour of the Mar de Plata area, we also stopped at the Groto of the Handkerchiefs.  About 50 years ago a husband and wife were caught in a torrential rain storm and sought shelter under a big rock.  The couple each asked God for a miracle– he that their lives would be spared, and she, that she would become fertile and conceive.  They sealed their covenant by tying a knot in a handkerchief.  The miracles they prayed for were granted and thus the tradition began.  The area is cleared every few weeks and then it starts anew.  I found it humbling to stand in a place where so many thousands of people had expressed faith outwardly and asked God for a miracle.

1 thought on “In Retrospect: Faith in Argentina”